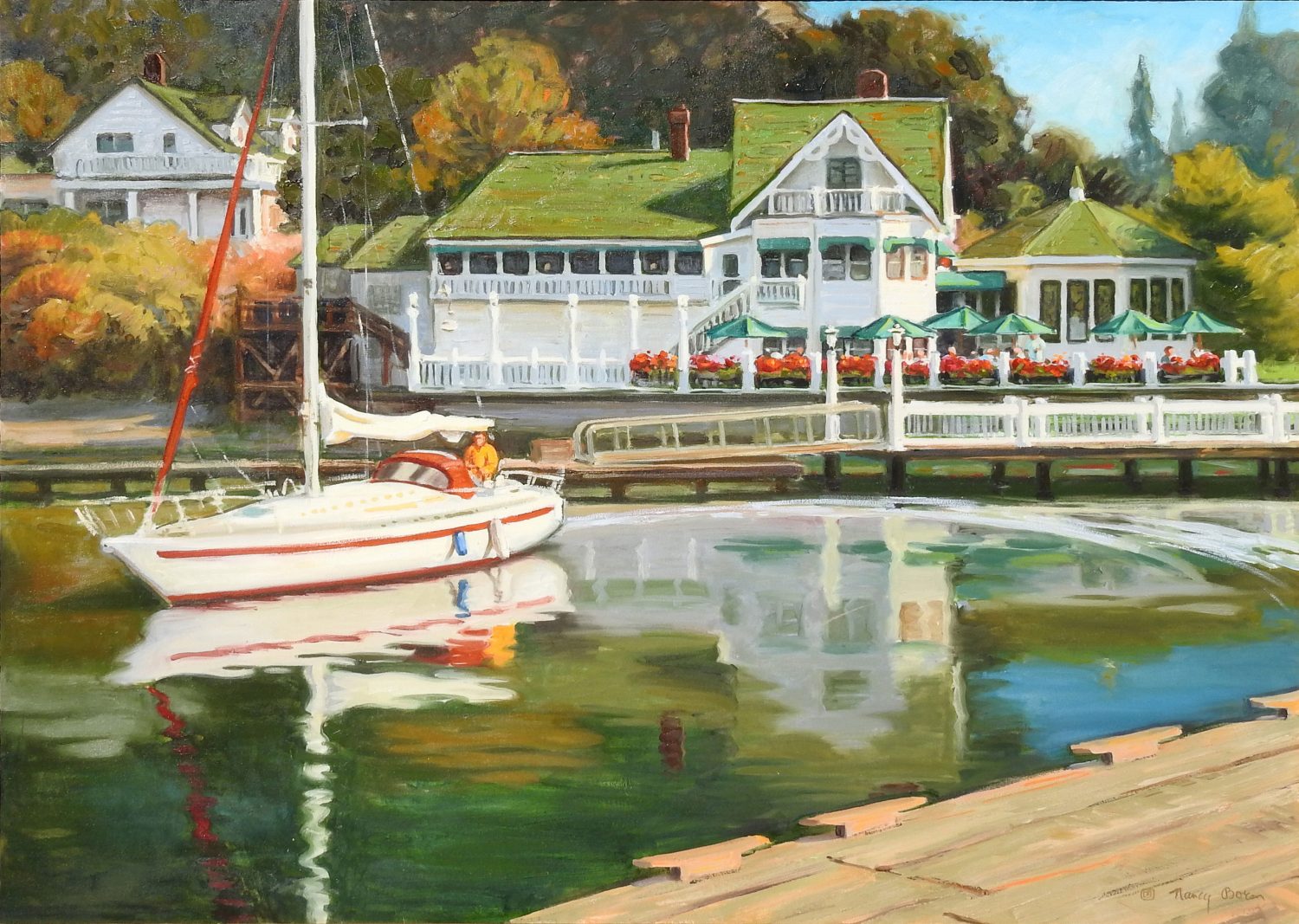 A paintbrush dips delicately into a vibrant red paint on the artist’s palette. Light strokes are gently pressed along the canvas, creating a strong and smooth line. Despite its seemingly slow, careful progress, the painting seems to come alive in no time, as the painter efficiently brings to life what they are envisioning in their head. Watching an artist create a masterpiece live is one of the most intense, exciting, and enjoyable experience – why do you think Bob Ross had such a successful tv show? On August 14 and 15, Southwest Gallery is bringing that experience to the North Dallas Corridor as they host their Annual Summer Art Festival from 1-5 p.m.

The Summer Art Festival will feature many local artists, who will be onsite creating beautiful works right before your eyes. Guests will also get the chance to view completed paintings, which you can take home to display proudly in your home.

Jun Hao was born in Tianjin, China, and his landscape paintings pay tribute to his homeland. According to his bio, “The picturesque landscapes come to life with sharp contrasts, harmonious colors, and bold compositions. As the artist said: ‘Love nature, it is a rich grace from God, I welcome you to join me on my journey of tranquility and peace.’”

Linda Lucas Hardy is an internationally recognized artist, with her articles and artwork appearing in many national magazines and art books. She has won many awards, including being the only colored pencil artist to have won the CIPYA ward and the EXPY Award by the Colored Pencil  Society of America, as well as the only colored pencil artist to have won the EXPY twice and the International  Artists Magazines Grand Prize Award. She has returned to painting in recent years, with her bio stating, “The depth and breadth of her work as well as the level of color saturation and power that she achieved with colored pencil is now being applied to the medium of oil.”

Paul Walden learned the classical concepts of composition and color from the Germanic school of landscape painting. He later was moved by the current stream of free abstraction in American art, and he decided to find a middle ground between that freedom and the concepts  of prescribed traditional techniques.

Kay Walton is a full-time artist who creates paintings of distinction and is often inspired by Texas landscapes, especially the beautiful Hill Country dotted with oaks, sparkling streams, winding roads, and quaint farmhouses. She has been painting professionally for thirty years.

Nancy Boren grew up in a home surrounded by art, as her father was a Cowboy Artist of America member, James Boren. She has exhibited at the National Cowgirl Museum and Hall of Fame, as well as many other prestigious shows. Her paintings were featured in the feature film, 9 Months, and the ABC tv show, “The Benefactor.”

George Kovach  was born of Hungarian descent in Cleveland, Ohio, where he grew up on an Ohio farm that inspired him to get into art. He now paints his home in Texas or his summer studio in New Mexico. He was a founding member of the Texas Cowboy Artist Association, co-illustrated a book, has been featured in magazines, and had a print rank among the Top 25 prints of 1993 by galleries across the country.

Dennis Johnson’s work “Dennis Johnson’s work revels in the joy of painting,” according to his bio. “It has the ability to transform materials into something other than what we perceive to be. The blending of brushstrokes; fat and thin, soft and hard, the obscuring of the canvas here, the absolute tactile impression it leaves there, would almost hint at collage, yet this is paint on canvas – not torn bits of cloth painted over printed pictures, found objects or written words. This is painting that doesn’t have to relate to anything, that doesn’t have to follow rules. It simply invites us to think, to reflect, to open our mind to the possibility that all any art has to do is make us feel.”

Manual Garza grew up in Texas Hill Country, where he recreates this scenery by capturing in oil the thick heat, bold sunlight, and cool shade of Texas. According to his bio, “His use of lighting and vivid colors and his realistic style reflect his passion for the beauty. Garza’s work often features not only wildflowers, but quail, pheasant, turkeys, deer, and a host of domestic birds.”

Robert A. Fobear loves hiking, camping, and photographing the woodlands, marshes, and mountains of the U.S. In his statement, he said, “I see God’s creativity in nature with a great sense of clarity and appreciation and wish to bring the viewer into this realm through my paintings as a Fine artist.”

Matthew Grant has enjoyed art since he was a kid, drawing superheroes and athletes. After receiving formal training, he now has a career focusing on the American West.

Robert Hogan “has become an artist of recognition,” according to his bio. “He has the ability to capture action in a way that lets you relive memories over and over again while at the same time enjoying beautiful art that enhances your home or office.”

Lynwood Bennett has participated in many art competitions and jurored shows throughout the country and has won several awards. He is active in the Boerne Area Artist Association and is a member of The International Society of Acrylic Painters. He works with acrylics to create beautiful landscapes.

Mark Whitmarsh said in his bio, “As I build layers of color, a personal iconography evolves on the painted surface. I’m interested in a surface that has a rich patina with a modern ancestry. By adding and subtracting layers, a genesis over time is revealed.” He works on paper or canvas with oils, pastels, acrylics and watercolors to explore light, color and space in his art.

Roberto Ugalde is “an expert oil painter who expresses the essence of his subjects in a way that draws viewers into his paintings,” according to his bio. “He masters the use of oils in an impressionistic manner that breathes life too his landscapes and figures.”

Tony Saladino’s artwork stems from personal experience, although he strives to create universally compelling images. “His use of color and subject matter make for beautifully executed works that are not only pleasing to the eye but thought-provoking as well,” stated his bio.

Chad Haspels is a nationally known sculptor whose award-winning artistic background began at a young age. He has been sculpting full time since 2002, where h e h as produced many high-profile works throughout the U.S. and received multiple awards for his work. He and his wife, Jennifer, co-own and operate their own personal studio and gallery in Colorado.

This Summer Art Festival is going to be amazing, you don’t want to miss it!

Read more today in our latest post, Conquering the