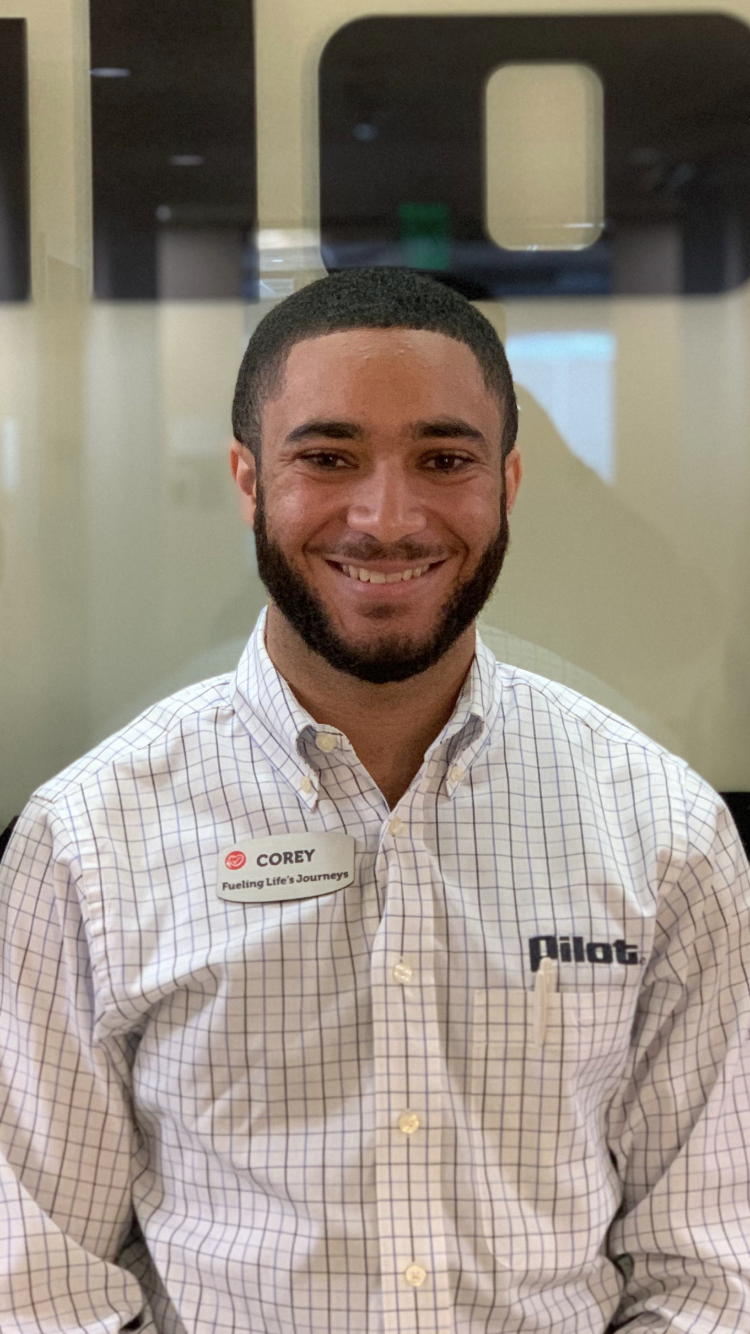 Corey Johnson isn’t afraid to work hard. For him, 19-hour days filled with work, school, team meetings, strategy and reading, is the norm. He then gets a little sleep (from 2 a.m. to 7 a.m.), then does it all over again. But this MBA student in Stephen F. Austin (SFA) State University’s Rusche College of Business can handle long days and all the challenges that comes his way, because he’s young and inspired, with an end in sight. He only has four classes left and expects to have his master’s degree by fall 2022.

Even if an MBA wasn’t on the table, Johnson would have enough to keep him busy. In his fourth year with Pilot Flying J, a fuel and travel center company based in Knoxville, Tennessee, Johnson is moving up the ranks at an impressive pace.

“At Pilot they say you’ll never do the same thing twice,” Johnson said, referring to the opportunities offered by a company that employs nearly 30,000 people and operates in 44 states and six Canadian provinces.

He negotiates directly with trucking companies that rely on Pilot Flying J to fuel their fleets.

“You have to pay attention to detail, and you have to be mindful of body language and tone – yours and theirs,” he said. “It’s pretty intense.”

With the foundation of his career already built, and with a master’s degree on the way, Johnson is in good shape. But there was a time when his life was marked by great uncertainty. In August 2005 when he was in the fifth grade, Hurricane Katrina made landfall, forcing Johnson and his family – a younger sister, mother and maternal grandparents – to evacuate New Orleans and head to Addison. Though the storm moved on and New Orleans recovered, Johnson remained in north Texas.

“It changed my life for the better for sure,” Johnson said.

Johnson credits living in Addison with much of his success. “I had a great opportunity to start working at a local grocery store at 16 years old,” he explained. “I worked at that grocery store all through high school and in the summers during my first couple of years in college at SFA. This opportunity gave me first-hand experience of what real work is like. I learned how to manage people and handle other operational functions when I became a supervisor. This is probably where I first learned that everything in life is about people. If you don’t support your people, they will never trust you and it will be extremely difficult to meet your organization’s goals.”

When he first arrived in Nacogdoches, he planned to go into education and be a high school counselor. But during orientation at SFA, he befriended a group of business majors and soon found himself at the McGee Business Building, where he’d happily remain until earning his bachelor’s degree.

“I miss my professors,” he said, citing the influences of Drs. Kahla, Ballenger, Harden, Allen, Cox, Thornley, Crocker and Reese, when he was on campus every day absorbing knowledge. “The fourth floor of the college was my home. There were so many things to be involved with if you wanted to be involved.”

Johnson, even though he lives in Dallas and dials into class over the Internet as one of the college’s first Zoom MBA students, is still a member of the Society for the Advancement of Management and also has a seat on the Rusche Alumni Business Advisory Council. He’s recruited for Pilot Flying J at SFA and has returned to campus to speak at the Career Success Passport and the Campus to Career programs.

Johnson said that he would love to work in Addison one day again and continue living in this great Town. “I love the geographic location of Addison more than anything,” he said. “You are not too far from the Plano/Frisco area and Dallas is right down the street. You can go anywhere in the DFW Metroplex. There’s an abundance of restaurants and activities you can participate in. One of my favorite events in Addison growing up was going to the Taste of Addison Festival and Kaboom Town to watch the fireworks.”

Being a high-producer at one of the nation’s largest privately held companies while also excelling in the classroom as a graduate student takes a lot of work. In Johnson’s case, that means 7 a.m. to 2 a.m. But that’s not a problem.

In his rare moments of free time, Johnson enjoys hanging out in Addison. He loves running through Addison Circle and the surrounding parks, going to the AMC Village on the Parkway 9 movie theater, and trying different restaurants, and he’s looking forward to bowling once again. “The opportunities to try new things in Addison are endless!” he said.