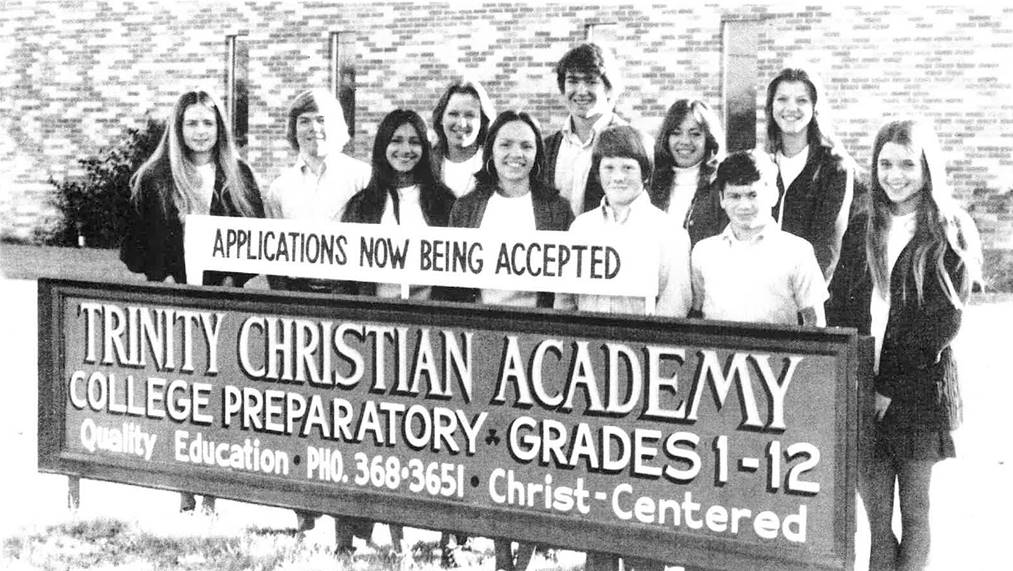 Flip back 50 years through the faded photographs of time, and you’ll discover that 1970 was a very special year. The Beatles broke up and Led Zeppelin got together. Kids were playing with Cher Barbie dolls and Hot Wheels tracks. “The Brady Bunch” and “Hawaii Five-O” were playing on everyone’s TV sets. Gas was only $.36 a gallon and the average price for a Super Bowl ticket was $15. But North Dallas Corridor residents will know one of the most important things that happened in 1970: Trinity Christian Academy (TCA) officially opened its doors!

TCA is a private co-educational school for grades Pre-K through 12th, which was founded on the purpose of “educating and developing the whole person for the glory of God.” This school offers Christian families and their children a demanding college preparatory curriculum within a Christian community committed to integrating Biblical faith and learning. Biblical principles are integrated into every curriculum in the school.

“What makes us unique among other faith-based private schools would be our high academic standards, our robust athletic and fine-arts program,” said headmaster Dave Delph, who has been in this position since 2002.

But before it became a successful school with over 1,400 students, 135 teaching faculty members, 55 athletic teams and a $21 million budget (which is completely debt-free), TCA started out as a high school inside Grace Bible Church in Dallas under headmaster Dave Coterill (1970-73). Within four years, TCA had a K-12 enrollment of 575 students and had officially outgrown the church’s facilities. So, in 1974, TCA purchased 40 acres of land in Addison for $975,000—predominantly funded by parent-bought bonds, the vast majority of which were “forgiven” at maturity. In addition, two board members guaranteed an additional $450,000 to build the first building.

At the time, that area of Addison was known as “the land of dirt and sorghum.” Upon seeing it for the first time, one student commented, “Mr. (Bill) Millet took us to the land to take a picture of us for the brochure. He wanted us to look across the fields thinking of the future. But we were thinking, ‘This is crazy. It’s just grain sorghum for miles and miles.’ There was a sign that said, ‘Future home of Trinity Chrisitan Academy.’ I would go out there once a week to cut down the weeds so people could see the sign.”

Despite the fact that Addison just had one flashing red light, no real roads, or water or sewage hook-ups, TCA’s board of directors saw promise in the place. Although some families left TCA with the move, many of them stayed. The wall-raising ceremony for the new building was a community event, where representatives from each class wore hard hats and hammered in a nail. At that event, it was raining all around the town, even across the street, but not at TCA! It was a good sign for things to come.

In January 1976, the doors opened at TCA’s current location, 17001 Addison Road, and students in grades 7th-12th officially moved in. Pre-K-6th grades moved in August 1976. At the time, there were just three buildings: the Upper School, the Lower School and the field house. In September, the Tom Landry Stadium was completed, and parents were still installing lights on the polls as the first football game began at TCA (the players later won that game)!

John Schimmer was headmaster from 1973-78, who helped acquire accreditation for TCA during his time here. From 1978-80, Harold Lennington was headmaster, and then Mike Beidel took over from 1980-94.

Also in 1980, TCA sold a portion of its property and used the $2 million profit to retire debt—the school has been debt-free ever since!—and pay for the multi-component building (MCB), which contained the main auditorium, cafeteria, gymnasium and library when it opened in 1982. In addition, the building also contained music and art rooms and doubled the square footage of the junior and senior high school. Now, the MCB contains the main gym, the Middle School cafeteria, auditorium, library, choir and 6th-grade classrooms.

Stephen Konstans Class of ‘83, said “When the MCB building opened, we finally had a real cafeteria. Only the seniors were allowed to eat up on the stage; it was a big deal for us, and we enjoyed our ‘place of honor.’”

Headmaster Beidel also implemented an increase in tuition to have competitive salaries and benefits to attract outstanding teachers. “The greatest asset a school has is its faculty and coaches,” explained Delph. “If you aren’t competitive financially, then you’re at risk for being sub-par.”

In addition, Beidel hired Dr. Dan Russ, who later became headmaster (1994-2002), to create and implement an integrated history and English program that began in 1986. “This humanities approach allows our students to engage in the history and literature and art and music of the time period, without compartmentalizing history and English,” said Delph. “Kids that go to college and major in engineering or medicine or anything else will have a leg up in securing jobs because of their ability to think critically and communicate effectively.”

1986 was also the year that the Town of Addison provided nearly $3 million in capital improvements in order to use TCA’s athletic facilities after-hours for 20 years. Fast-forward to 1994 and the administration building is completed and the middle school classrooms are renovated. The school continued on its path of growth one year later, as they acquired land to the north, where they built a new Upper School building and a baseball stadium. This helped TCA grow from a class size of 80 to 120.

In 2002, TCA moved into the new Lower School Building, which was double the size. They were able to add a cafeteria, workrooms and a KTCA studio for live TV broadcasts each morning featuring fourth grade hosts.

“As I think back over my 14 years at TCA, I remember something very significant…dreaming, planning, waiting and watching the new Lower School come to life,” said first grade teacher Lynne Wyatt, in a reflection in 2010. “We had to pack up our rooms in January to move. We had school all week, and had parent volunteers help entertain the classes while we moved our entire classrooms…I will never forget those days, and I will never stop feeling beyond blessed by this awesome Lower School building!”

Five years later, TCA purchased the gymnastic center on Sojourn Road and transformed it into the Athletic Training Center, a place where today student-athletes have weight rooms, training space and on-site professional training instruction. In 2010, the new 35,000-square foot Performing Arts Center opened. This building has an auditorium that seats 900 people as well as classrooms, practice areas and sound-proof recording rooms for band, choir and drama students.

Other notable achievements include hosting former President George W. Bush at a fundraising dinner in 2010; hiring Mike Singletary, NFL Hall of Fame member, in 2018; having a robust athletic program with 55 teams with a combined total of more than 70 state championships; having 20 unique clubs in the Upper School and having a $1.5 million per year scholarship fund for students in financial need.

“Having athletics has always been very important for TCA,” said Delph. “There is so much that’s learned through athletics that isn’t learned in the classroom: discipline, teamwork, the opportunity to compete and gain skills.”

In addition, TCA students have many opportunities for extra-curricular activities and leadership skills. Some of these options include joining a club or organization, being a part of the Middle or Upper School worship team, going on the 8th grade wilderness trip in Arkansas, attending Sky Ranch and more. TCA also offers mission and educational trip to Mexico, Brazil, Zambia Israel, Europe or Kenya. The school’s first mission trip began in 1989, when volunteers from the school helped establish the Rio Bravo Children’s Home in Reynosa, Mexico over a period of 15 years. To this day, TCA continues to supply them with school supplies, technology, Christmas gifts and more. “There are many opportunities for our students to use their gifts,” added Delph.

TCA also has a robust fine arts program—“One of our greatest strengths is visual arts,” said Delph—that includes band, choir and theatre. In 1987, the theatre performed their first show, Fiddler on the Roof, and since then have put on many outstanding productions, including Les Miserables, Oklahoma, 7 Brides for 7 Brothers and Mary Poppins among others.

Of course, the best part of TCA is its students. The Class of 2019 had 133 students graduate with an average GPA of 4.012 and $7.5 million awarded to them in scholarship funds for college. In addition, 13 of the graduates were Eagle Scouts and 36 received TAPPS Academic All-State Honors. Over the four years in Upper School, the class participated in six state championships and won 11 district titles. Ten students won individual state titles and 11 of them competed in the collegiate level athletically! Also, 65 of the graduating students had been at TCA since first grade and completed nearly 24,000 hours of community service since their freshman year.

According to Delph, TCA has a 99 percent rate of graduates who go to college. They also have an “amazing track record” of students gaining admission into military academies and dozens of alumni have served (including one who was killed in action). They have alumni who have gone to Harvard Medical School, become missionaries in several different countries, are business leaders, medical professionals and more. They have about 40 alumni that are currently teachers or coaches at TCA, and about 10 percent of the student population are legacy students, with one or two parents who also went to TCA.

Delph shared a few goals for the future at TCA. The school is in the midst of a capital campaign called Pursuing Excellence to help build a new Middle School. They are hoping to raise about $24 million so they can break ground by summer 2020. After that, they want to build a new dining hall, a new administration building and a new Pre-K building.

“TCA’s mission is why I wanted to work here,” said Delph. “When I first came to TCA in 1986, the police were driving Volvos,” said Delph. “The tollway ended at Galleria Dallas—it was just a service road on Dallas Parkway to get here. I was a math teacher and coach and became the head of technology—before the internet. Computers were just coming to schools. Now, we have students coming from all over—Allen, Frisco, Park Cities, Rowlett, Coppell and Irving—with the convenience of the tollway making us very accessible. During the years, our partnership with Addison has been a very positive one.”

This week, little ones will be walking the halls of TCA for the first time and seniors will begin walking them for the last time. As TCA begins the start of its 50th year, there is no doubt being just as dedicated to outstanding education and student success as they always have been.