Bitter Sisters Brewery was listed as one of the “Seven Things To Look for in 2015 in the North Dallas Corridor” in December 2014. To say that it has lived up to the hype would be a huge understatement. The brewery has made a name for itself and you can find their beers all over town. Just a few weeks ago, Bitter Sisters celebrated their fourth anniversary and threw quite a party to celebrate.

The anniversary party included samples of Special Anniversary brews and special anniversary glassware. They also had The Tipsy Pig BBQ food truck out serving amazing food and Addison Coffee Roasters was also on-site serving pour over coffee. For those with a sweet tooth, Yellibelly Chocolates was there serving chocolate treats. Guests also danced and celebrated with live music by Big Joe Walker and A Moment’s Notice.

The Special Anniversary beers for the event were:

Bitter Sisters is named after Brewmaster Matt Ehinger’s wife and her two sisters. Together, they turned his college hobby into a successful brewery that can be found throughout local restaurants and bars. Matt is a veteran brewer with over 20 years of brewing experience. The conversation to start the brewery was one that they had for several years before it became a reality. 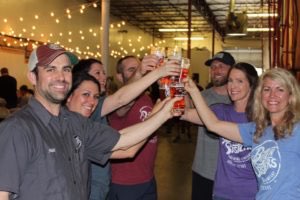 Bitter Sisters opened its doors as Addison’s only production brewery. You can schedule a tour and tasting for a small fee where you can learn all about how they brew their beers and how their brewery went from a dream to reality. The tour and tasting include a guided tour, 3 drink tickets, and a Bitter Sisters pint glass. Visit their website for more information and make sure to follow them on Facebook for all the latest events.