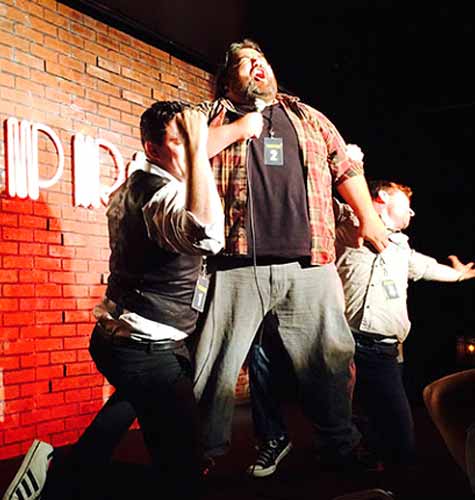 Katniss Everdeen would not become District Twelve’s champion in this version of “The Hunger Games” and Peeta wouldn’t fair any better. On Wednesday, Oct. 29, The Addison Improv Comedy Club presents The Humor Games at 8. p.m. The improvisation show is a gladiatorial elimination-style, last man standing battle of comedic wits sponsored by Locked OUT Productions, LLC.

The city’s best improvisers will offer themselves as tribute and will face each other center stage to perform games and scenes chosen by the audience. The audience will play the role of The Capitol and President Snow, wielding the power to choose any scene from any movie, television show or political blunder they deem appropriate. Denzel’s Oscar winning rant during the denouement of “Training Day” and an impersonation of George Bush will inevitably make appearances.

Moreover, the improvisers’ ability or inability to generate laughter will determine who will survive to earn the honor of hoisting the HGTrophy as the ImproVictor. The Humor Games features a cast of talented improvisors, some of which are former victors – Jessamyn Berger and Billy Betsill.

Von Daniel, Creative Director of Locked OUT Productions, LLC, producer of The Humor Games and three-time humor games victor, is passionate about the improv community. “I hope the Humor Games can help bring the improvisation community together. This show is designed to allow different performers to network and play with other local talent,” says Daniel. Creative, improvisational events such as The Humor Games taking place at The Improv shouldn’t come as surprise given its illustrious history.

The Improv is the mecca of comedy and has nourished comedic talent for generations. Founded in New York City in 1963 by Broadway producer Budd Friedman, The Improv quickly flourished into an epicenter, a proving ground for comedians to test their material. Jerry Seinfeld, Louis C.K., Jay Leno and Eddie Murphy are a few of the legendary comedians that earned their stripes on stage and the most talented received television show and movie deals. Even Larry David, creator of Seinfeld, graced the stage to heckle fans in extraordinary fashion. Overtime, The Improv expanded to locations all over the country to find talent and present the talent to the masses.

For $12 you can gain admission to the show of a life time. Who will be The Girl On Fire? Will two improvisers become star-crossed lovers? Who will be crowned the ImproVictor for the District of Addison? You have the power to choose. Follow the links for more information on The Addison Improv Comedy Club, Locked Out Productions, LLC , The Humor Games and ticket prices. Happy Humor Games and may the odds be ever in your favor!

Alvin, a high-functioning Game of Thrones zealot, graduated with a Bachelor of Arts in English with a focus in Creative Writing from Texas Tech University. Labeled the Bane of the North, his passion for creative expression is satisfied by opportunities to write on a freelance basis. A video gaming juggernaut by day and a J. Crew enthusiast by night, Alvin enjoys exploring trendy nightlife spots, museums and going to music festivals.

Have a Pizza Party for National Pizza Day - Addison Guide

Read more today in our latest post, Have a Pizza P