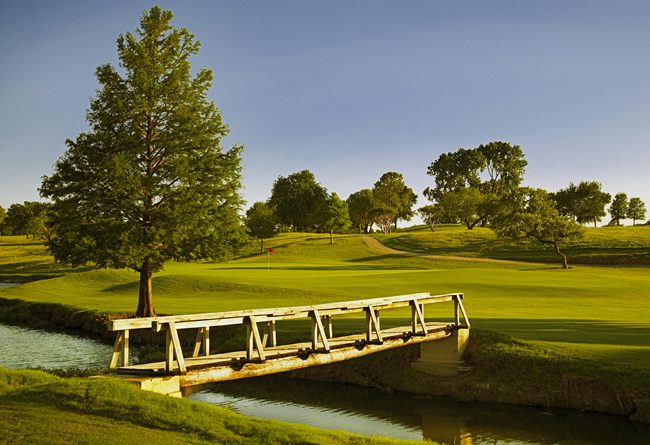 Strictly speaking, golf is a mere game, a contest in which the goal is to club a tiny ball around a series of obstacles into small holes bored into the manicured grass of picturesque landscapes using as few strokes as possible.

At the sport’s best, the cup itself is the beauty mark upon the topography, a single enlarged pore in an otherwise flawless expanse of impeccably maintained skin. It is the impossible pursuit of perfection played out in the setting of natural beauty groomed, sculpted and fertilized by men until the greens are even greener, the gently rolling hills even smoother and the trees more perfectly spaced than anything found in the uncivilized world. It is a symbol, almost a parody, of mankind’s dominance over nature. We will forge a blunt instrument from the elements and use it to drive a game piece of synthetic materials, just barely large enough to be visible in flight, hundreds of yards into a nearly imperceptible indentation in the soil.

But ask the North Dallas area’s most passionate golf professionals about the pursuit that puts bread on their table — whether they manage courses, sell equipment or teach others how to improve their swing — and the words “sport,” “game” and “hobby” are rarely used. Golf is all those things, and yet, it is so much more. It is at once competitive and communal, exercise and relaxation, a solitary pursuit and a networking opportunity.

Prestonwood Country Club General Manager Brian Keelan describes the game as a lifestyle. “It’s one of the few sports you can play with people of all different ages and abilities,” he says. “You can play with your grandfather, grandmother, your son, your daughter, wife, college buddies, business associates, male, female. It really has no boundaries. I think quite often in business we put everything in email, websites, things like that. I think more things need to be done by a handshake and by spending time together with some of those folks and golf is such a good way to do that.”

Prestonwood’s junior executive program, which offers tiered membership fees for younger golfers based on age, aims to draw in younger members who could use that kind of face time with friends, family members, coworkers or potential clients regardless of their own backgrounds and whether or not they have been part of a country club in the past.

“For the young executive, somebody who may or may not have grown up in this lifestyle, there’s a tremendous network of people in the private clubs,” he says. “It’s a very small community, but one that’s very open. I think the relationships you build in a private club, much like a fraternity, they just don’t go away. They’re incredibly important for business out there. It’s all about networking.”

Of course, networking isn’t the only thing the sport has to offer. As for himself, Keelan says he isn’t a competitive golfer, but he greatly enjoys the time relaxing outside. Most of all, he enjoys spending time with his 12-year-old son and looks forward to playing with his 10-year-old daughter.

For Frank Hardwick at Sellinger’s Power Golf, the appeal of the game lies in the frustration stemming from the impossibility of perfection. Of course, one should keep in mind that his business is in the matter of eliminating imperfection. Sellinger’s original Roanoke location and the Addison branch custom-fit and build clubs, retrofitting and specializing equipment for discerning amateur and professional golfers looking to work out kinks in their games. Still, he makes a beautiful case for striving for the unattainable. 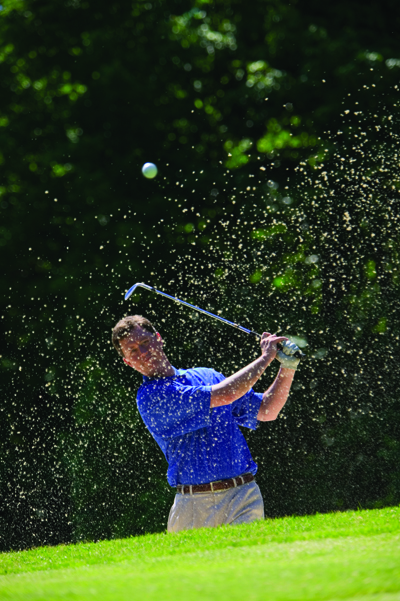 “It appeals to the competitiveness in me, whether it is against nature or another player,” he says. “You can never beat the game. You can never be perfect, so it’s always challenging. It’s frustrating as hell. You can play four or five hours of golf, but you hit that one shot and it was all worth it.”

Hardwick too uses the term “lifestyle” to describe his customers’ relationship with the game, and says they play for multiple reasons at once – competition with friends, relaxing or using the sport for business purposes. The idea of businessmen and -women networking on the course or closing big deals on the links certainly has basis in reality, but one shouldn’t assume the golf course is simply a mere setting for wheeling and dealing. Some of his customers are high-level executives who spend thousands and thousands of dollars on clubs. It’s recreational and relaxing and a chance to flex their competitive nature. After all, why spend so much money to perfectly customize a club if it’s a mere prop in the theater of a business deal?

“They play for different levels [of those reasons],” he says. “A guy who plays for business reasons probably plays for a lot more reasons than just business.”

Mickey Lynam, market president at Veritex Community bank, confirms that notion. “I just always enjoyed golf and grew up playing it,” he says. “It’s one of those sports. Once you get older, as your body ages, you can continue to play. You can’t pole vault or high jump as you get older.”

Charity golf tournaments in particular can help a business not only support a good cause but network. Playing as a team with customers can develop a spirit of camaraderie that helps grow relationships and friendships.

“When you’ve got a lot of competition on a business deal, if that person has played with you on the golf course, that may help,” he says.

It can also help one decide whether pursuing a business relationship is a good idea after all. Dave Sykes, CEO of DSKW and Associates, had an experience several years ago that made him reconsider the idea of doing business with someone.

“He tended to be somewhat of a violent person, and would throw his clubs,” he says. “After one round with that guy, I decided that’s about as much as I want to deal with him.”

Character really comes through on the course as well, he and Lyname both point out. Lynam says he has never seen someone outright lie or cheat, but Sykes says seeing someone fudge the rules has led him to make a mental note to himself about keeping a closer eye on that person off the course.

Head Professional Brian Ricketts at The Honors Golf Club Dallas adds that the game is a legacy, a family tradition for many of the most passionate golfers, including himself.

“Everybody has so many different reasons,” he says. “For some guys it’s just a part of life. They grew up playing. Their dad may have played and taught them to play, so it might be a family thing. A lot of members play with their kids. It offers them a unique bond. It’s generational, a lot like hunting. If they grew up deer hunting with their dad, that’s their bonding time. That constitutes a lot of private club members, those who have played a long time.”

On the other hand, the appeal to business leaders is also multifaceted, he says. And not all of those who get into the sport do so because they grew up with it.

“Those who start playing later in their career, they might play for friendship, for business, networking or playing with their college buddies,” he says.

Part of why the game has an image of being the backdrop for wheeling and dealing is because of who is able to play the sport, he adds. It attracts the wheelers and dealers.

“Golf still has an aspect to it that there is a financial barrier to entry,” he says. “In private clubs, certainly, just by nature of who is there. Oftentimes it’s decision-makers or even owners of companies, just by the nature of who is able to join the club.” 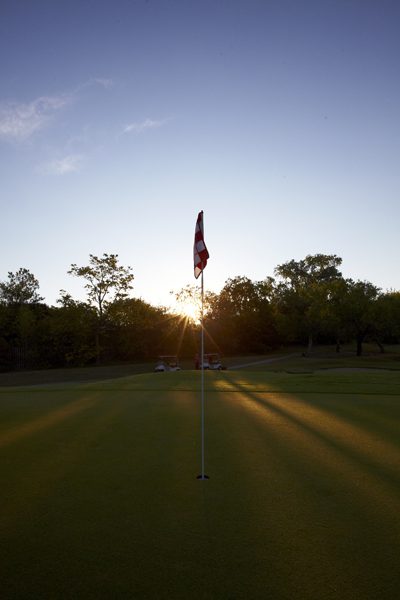 But it’s not just because of who can afford to play that the game lends itself to business. The relaxed nature of the game itself is a big part of that appeal. A sales representative might get to spend as much as four hours with an existing or potential client. Even a faster course like The Honors, Ricketts says, offers a good three hours of time to develop a relationship. And unlike, for example, racquetball, the easy pace of the game means very little of that time is spent actually hitting the ball or otherwise exerting too much energy or concentration to hold a conversation.

That said, however, it’s not always a good idea to bring work onto the course. “There are other people who don’t want to do anything having to do with business on the course,” Ricketts says. “They’re here to escape business.”

For Ricketts, of course, golf is his business. What he loves most about the game, the reason he made it his profession, is the competition.

“I played competitively growing up and at SMU and I’m now able to use a strength of mine to make a career,” he says. “As a member of the PGA of America [the association of club professionals, not to be confused with the PGA Tour] and still being able to compete in tournaments and also compete with a friendly gambling game, even if it’s just for five bucks, I love the thrill of competition.”

He has played around the country as a college athlete, as well as in pro tournaments such as the Byron Nelson. In doing so he’s picked up on some of the things that make golf in Dallas stand out. “There are so many courses in DFW, everything from the highest-end private courses to some very accessible courses, both financially and geographically,” he says. “People in Dallas just love to golf.”

That dedication to the sport is both because of and in spite of the weather. Even in the dead of winter, there are frequently stretches of ideal temperatures for a few days at a time. And when the mercury stays past 100 degrees for weeks on end, traffic on the links slows — but there will still be dedicated golfers out there, making deals, making bets or just making time for their friends and family.

Have a Pizza Party for National Pizza Day - Addison Guide

Read more today in our latest post, Have a Pizza P